Competitors prepare themselves in the Bobsleigh tent during the Bobsleigh Four-man competition at The Whistler Sliding Centre, Whistler, during the Vancouver Winter Olympics. 26th February 2010. Photo Tim Clayton..'BOB'..Images from the Four-man Bobsleigh Competition. Winter Olympics, Vancouver 2010..History was made at the Whistler Sliding Centre when the USA four-man bobsleigh team, led by Steven Holcomb took the Gold. The first time since 1948, a gap of 62 years, since the USA have won an Olympic Bobsleigh gold and they did it with their sleigh named "Night Train"...The four days of practice and competition show the tension, nervousness and preparation as the teams of hardened men cope with the challenge of traveling at average speeds of over 150 km an hour. Indeed, five teams had already pulled out of the event before the opening heats because of track complexity, speed and fear, and on the final day, another four teams did not start after six crashes in the first two heats...Teams warm up behind the start complex, warming muscles in the cold in preparation for the explosive start. Many teams prepare in silence, mentally preparing themselves as they wait at the top of the run, in the bobsleigh sheds and the loading areas for their turn. When it's time to slide each team performs it's own starting ritual, followed by the much practiced start out of the blocks for just over four seconds, the teams are then in the hands of the accomplished drivers as they hurtle down the track for just over fifty seconds...Spectators clamber for the best position on track to see the sleighs for a split second, many unsuccessfully try to capture the moments on camera, The rumble of the sleigh is heard then the crowds gasp as it hurtles past in a blur...The American foursome of Steven Holcomb, Justin Olsen, Steve Mesler and Curtis Tomasevicz finished with a pooled four-heat time of 3min 24.46sec. The German team led by Andre Lange won the Silver Medal in a combined time of 3min 24. 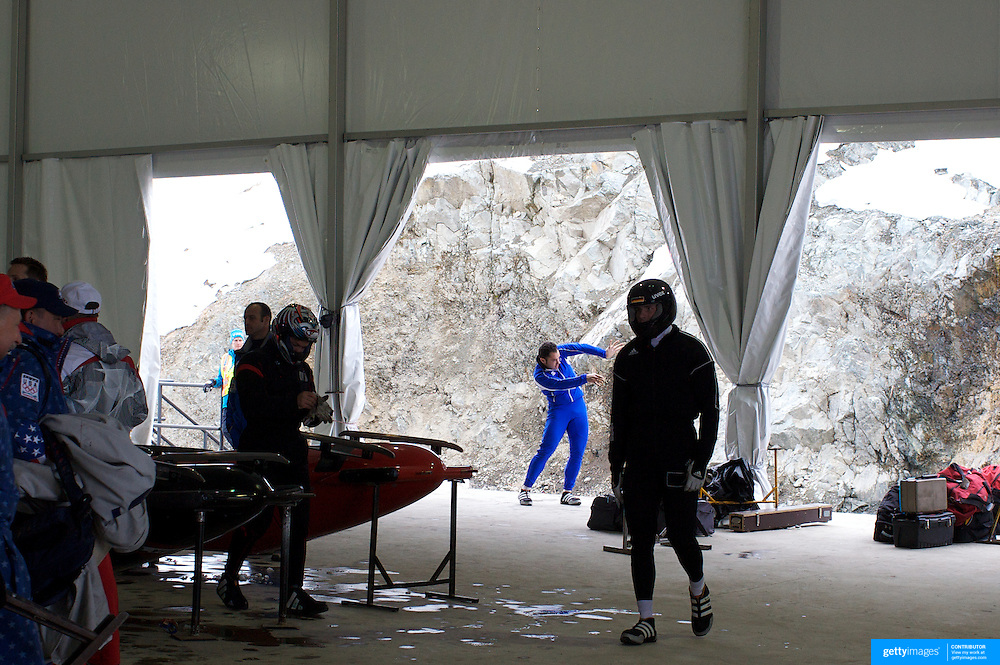